In light of the serious crash involving a pick-up truck and two child pedestrians that occurred on Thursday, February 20, 2020, the Sevierville Police Department, in cooperation with the Sevier County School System, would like to encourage safe pedestrian and bus stop practices.

Sevierville Police Department detectives have arrested and charged 47-year old Pablo Hernandez of Sevierville, TN with felony leaving the scene of an accident with serious bodily injury, after he allegedly hit two children this morning on Main Street and then left the scene. (See original media release below for additional details.)

Following the incident, detectives with the Sevier County Sheriff’s Office received information as to the identity of the driver. Shortly thereafter the driver came to the SCSO of his own accord. After being interviewed by SPD and SCSO investigators, Mr. Hernandez was placed under arrest. A citation for operating a vehicle without a valid driver’s license is pending. 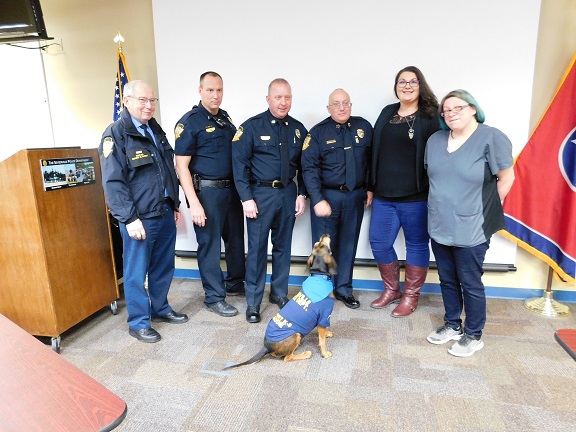 Maddie officially became a member of the SPD family this afternoon. She held her first press conference at 1400 hours in the SPD Training Room, surrounded by reporters and well-wishers.

The SPD wants to thank Sevier Animal Care Center Director Ashley Thomas for her support of our adoption, and Lynn at Clip N Dip in Sevierville for keeping Maddie clean and pretty! And Maddie wants to give a big bark to Chick-fil-A in Sevierville for supplying chicken nuggets at the press conference.